Setting up a virtual private cloud (VPC) in Amazon Web Services (AWS) is not supposed to be difficult if we understand following instructions from Amazon However, there are couple of minor gotchas that may result in a non-functional VPC. In this article, we will setup a fully functional VPC and deploy a two tiered application.

Suppose we have a multi-tiered application which needs to be deployed as follows. 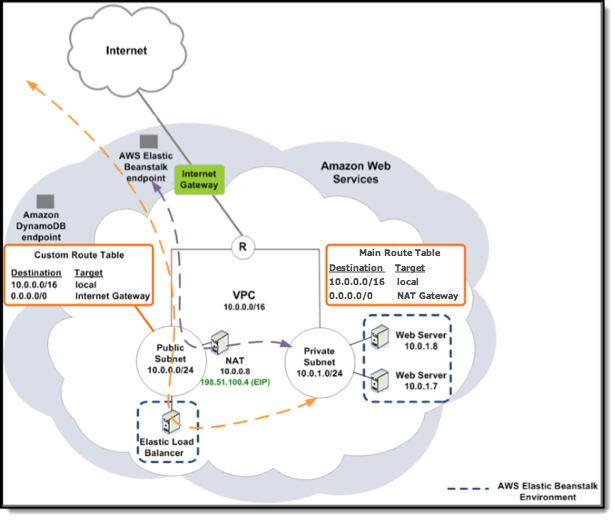 From the VPC Dashboard, click Start VPC Wizard and choose VPC with Public and Private Subnets.

These CIDR blocks can be changed to use other IP address patterns, e.g. 172.0.0.0 or 192.168.0.0. There are various subnet calculators available online to help configure subnets. The VPC console does subnet validation and would not allow invalid subnet definition.

Subnets and Availability Zones - Let’s choose the same availability zones for both public and private subnets.

NAT gateway - very critical and required piece to allow Elastic Beanstalk or ECS to get statistics from EC2 instances running in the private subnet.

Note: This version of NAT gateway would not be listed under VPC Dashboard-> NAT Gateway but can be found under EC2 Dashboard->Network Interfaces.

Use a NAT gateway instead option needs us to provide an Elastic IP Allocation ID, which can be obtained from EC2 Dashboard->Elastic IP. We may need to allocate a new EIP for the VPC if there isn’t a spare one.

S3 Endpoint - If EC2 instances need access to files from S3 buckets then we need to setup an S3 endpoint. We have option to limit S3 bucket access to private ,public or both subnets.

This completes our typical VPC setup. However, for Amazon RDS we need to augment our VPC.

From the Amazon RDS Dashboard->Subnet Group, create a subnet group that would include two private subnets from two different availability zones. Make sure to select the right VPC and add both private subnets. We can click on add all the subnets and then remove the public subnet (10.0.0.0/24) or add one private subnet at a time.

Note: This RDS subnet group will be used while creating an RDS instance.

From Amazon RDS Dashboard->Instances->Launch DB Instance->Select DB Engine, create a database. In the Network & Security part of the DB creation wizard, select right VPC and the RDS subnet group created for this VPC. Also select private VPC security group created above. We have option to pick availability zone based on the subnet group. For development, we can select just one availability zone (same as our public subnet’s zone) to keep everything in one zone.

The wizard will create an RDS instance in the private subnet and provide the DB URL and port number for JDBC configuration in the application/web server.

3. Deploy application in Private Subnet with ELB in Public Subnet

There are multiple ways to deploy an application to AWS (e.g. direct EC2 instance , EC2 Container Services, Elastic Beanstalk etc.), but we are going to just focus on Elastic Beanstalk deployment method using Web console. The idea is to show how to choose VPC, private subnet and security group.

On the Environment Type screen, choose predefined configuration for the application and then select Load Balancing & Auto Scaling for the environment type.

On the Additonal Resources screen, check Create this environment inside a VPC but do not check the RDS option as we have already created database.

The wizard will deploy application in the ECS environment with a Load Balancer and Auto Scaling group.